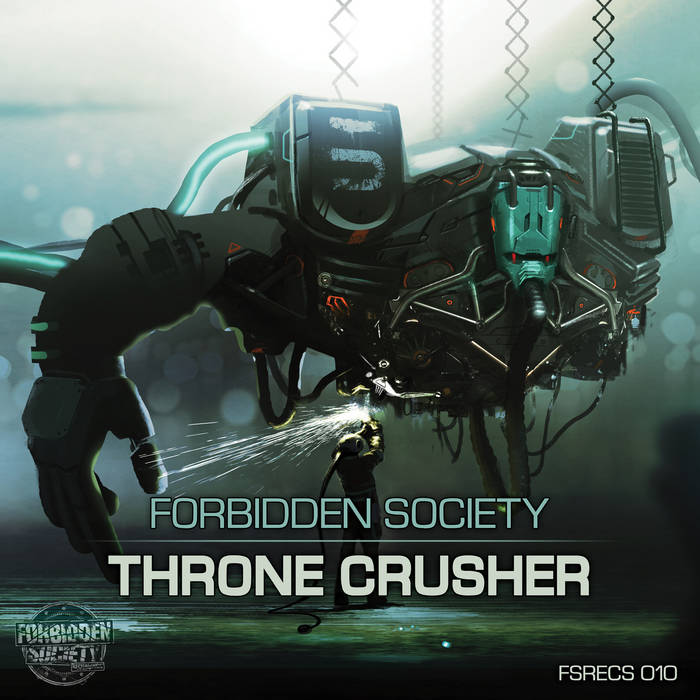 After a sizeable period of anticipation, Czech Republic native ‘’Forbidden Society’’ touches base with his full length album project called ‘’Thronecrusher’’. Sublimely packed with an equally inventive artwork, Forbidden Society’s biggest project thus far comes in the form of a 2X12’’ vinyl package and a full length CD with an additional disc that contains a 55 minute jaw-dropping album mix. The overall sound of the total project loyally nurtures fans of the signature Forbidden Society Recordings sound in a way that is refreshing and imaginative. A true must have for lovers of the harder side of Drum & Bass music and music with metallic taints.

“I have been working on this album for the past 2 years. After my 'To The Threshold' and 'Resist The Pressure' LP’s in 2012, I wanted this album to be somewhat different. It’s my own take on that European neurofunk sound. From straight up rolling drum & bass to more experimental tunes, 110 bpm business and halftempo Amen smashers, there’s a lot here. There’s also a little oldschool influence in there, remember the reese bass...I miss those days!
It’s been such a huge project for me, so much time and hard work but ultimately so much fun. All the mixdowns and mastering was by own fair hands! Anyway go press play, turn it up and enjoy.” Forbidden Society

After a sizeable period of anticipation, Czech Republic native Forbidden Society touches base with his full length album project called ‘Thronecrusher’. Sublimely packed with an equally inventive artwork, Forbidden Society’s biggest project thus far comes in the form of a 2X12’’ vinyl package and a full length CD with an additional disc that contains a 55 minute jaw-dropping album mix.

The overall sound of the total project loyally nurtures fans of the signature FSRECS sound in a way that is refreshing and imaginative. A true must have for lovers of the harder side of drum&bass music and music with metallic taints.
Tracklist

Creating the perfect opening tune for an album is a tough task. Boycott is a well-shaped roller that immediately grabs one’s attention. The firm rebellious vocal serves as the center focus point of this rugged anthem. Nevertheless, the vocal perfectly blends with the scorching bassline that sits nicely with the signature Forbidden Society drum patterns and FX. Early support by Audio and Ed Rush.

Primal Root is a somewhat more spaced out effort that conveniently plays around with firm synthesis, a gripping bassline and funky percussion. All of this happens after a anticipating intro that emphasizes on an apocalyptic feel. Military-sounding vocals included.

For a second it seems that Forbidden Society is treading towards the more accessible of drum & bass music on ‘Stay True To The Game’, but of course, this turns out to be smokescreen. A subtle but swift change causes the track to evolve into a ponderous contend of drum hits.

Technically advanced music at its best. Gripping dark drums with loads of FX tricks coming through that lift ’False Prophet’ to architectural heights. A violating beep tone alongside samples from American cinema bring this to life.

‘Kratos’ is probably based on the fictional character from the God of War series. The actual track indeed sounds like a final showdown between mythological creatures. The drums on this are the signature ear-deafening bangs that Forbidden Society has made his trademark.

Apocalyptic titles seem to be the tone for the Thronecrusher LP. World On Fire treads into harsh breaks and a stuttering atmosphere. A very appealing quote clocks in during the track’s progress.
Hard to be forgotten.

The almost future beats–like tech anthem ‘Enter’, thrives on technically advanced beats, blops and drum effects. Once again a cleverly placed vocal (reminiscent of American crossover bands) makes this bit stand out. Industrial brutality is what comes to mind when listening to this effort.

Starting off with a somewhat cinematic ambiance, ‘Downfall’ is built on mechanical beats that evolve into nicely rolling patterns when the track progresses. The quote ‘’What the hell’s been going on down there” that sporadically appears, emphasizes on the chaotic tone that Forbidden Society loves so much. A tone of disorder in an arranged manner.

The perception of paradise differs per person. This musical interpretation combines the soft tones of warm pads with blistering bass sounds and fateful drum hits. One of the more feel-evoking tracks on this album, as the title may suggest.

Ion Engines is one of the most complex bits on the album. Distortion, advanced synthesis and unusual drum patterns create a hazardous atmosphere that will go down well with the appreciators of the more rugged sounds within electronic music. Ion Engines is a true journey.

This bit proves that there is nothing but truth in its title. A lavish bass line bouncing over lush drums accompanied by hefty vocal cuts make this a vibrant cut. Once the dominant chord comes in during the break, the track switches up and evolves into a peak-time power tool.

Even a Forbidden Society album needs something feel-good and nostalgic. Like the title suggests, this track perfectly catches the vibe one would get when summer is near. Bouncy, animated and genuine, this must be the first summer anthem on the heavier side of Drum & Bass music.

As a bonus effort comes the Task Horizon Doomsday effort for ‘Meltdown’, a lot of percussion work is going on in this bit. A squelchy bassline and threatening synth pads give the track its hazardous atmosphere. The somewhat dreamy breakdown is a welcome change from all the tom action.

Probably the most metallic tainted track on the album. This bonus effort will break pots and pans at any party. The bumping vibe that flows throughout is that typical metal sound that Forbidden Society loves so much. This track is special because of its drum switches.