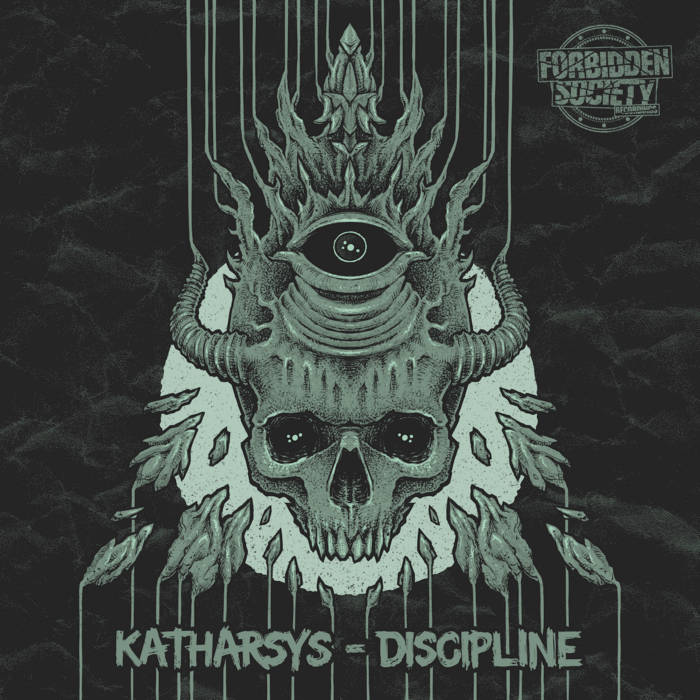 Kirill Bananov I cant even remember how long time ago I heard Brain Implant as ID-ID in some set and rewinded it many times. Sick to see it finally released. Favorite track: Katharsys - Brain Implant.

An apocalyptic vision, the ‘Discipline EP’ from Katharsys and Forbidden Society Recordings brings together drum & basses darker elements. Broodily standing in three parts, it packages a sound pushed by the duo since their inception. Beginning their musical voyage within the French bass world, they’ve carved themselves a persona whilst taking influences from the European circuit. A hotly tipped infusion of neuro and hard nailing basslines, prepare to be immersed within the world of Kartharsys.
The production outfit began working together in 2001, inspired by the dark groove of artists like Tech Itch and wanting to provide their own take on the subgenre. Progressively intense, their wide range of styles becomes clear even on first listen. Having previously produced dubstep on an array of different levels, their boundary crossing selection stretches from track to track. They make their intentions known, bringing you upfront, techy power-cuts that seep deeper and deeper into your ear drums with every listen.
First up is the forebodingly named ‘Dead Never Stay Dead’ and the title alone lets you know what you’re in for. Creeping whispers meet with you during its intro, gradually building you up between quickly flicking hi-hats and siren like snare. Cinematic sample creates an atmosphere which stays with the track from start to finish and it’ll be difficult to pull yourself away from its film score horror sequences. Kartharsys really prepare you for what’s about to be unleashed in the following two tracks.
Title track ‘Disciple’ is slightly more orchestral in its engineering. Cleverly adding layer by layer, its reverberating kick drum sends you on your way. Bit by bit, distorted beats take you in even further, with stocky subs to drop you down a winding chasm of cranking drums. This one is for the gloomier months, your perfect summer finisher that’ll remind you just how far down the rabbit hole can go.
Finishing off the EP is ‘Brain Implant’. Beware of what you’re about to step into, because when those drums hit they punch harder with every cycle. Soon you become entwined within this record’s pulsing composition and it won’t let go once you’re in its grasp. A sci-fi voice over gradually takes you there and just like an amusement ride you’re peddled into all-out chaos. Kartharsys presents the most driving slice of their repertoire with ‘Disciple’. Although, looking back at this whole body of work, it’s easy to see how it was delivered so effortlessly.